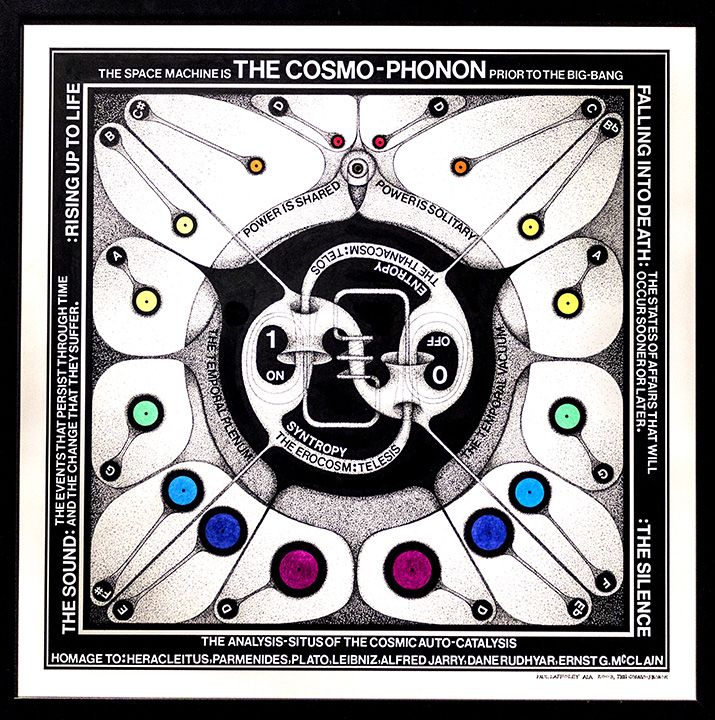 A Vision of Cosmic Possibilities for Music
The dissonantly integral and holistically resonant music of the future can hardly be imagined at this precarious moment of human history. If mankind should have to return to simpler, less technologically complex forms of living, yet with a new sense of “universal brotherhood,” integrated groups of human beings centralized by a common purpose may feel again the need for singing together in physical unison, while great gong-like instruments halo their chants with the vibrancy of the musical space these unified voices psychically evoke. If, on the other hand, modern civilization, once it is restabilized and assuaged, is able to produce musical instruments of which our present-day electronic devices will seem but naive and primitive forerunners, then a music of space-fullness — a music of truly cosmic pleromas of sounds — may emerge. I have dreamt of such an instrument and wrote about it in my novel Return from No Return (1953) [sic], placing it on a distant planet in the constellation Sagittarius. I named this sacred instrument Cosmophonon, “a field of forces surrounded by myriads of glowing crystals of many shapes and colors.” A quotation from my book may evoke the possibility of the super-sacromagical use of such an instrument.

The Cosmophonic field becomes alive with vibration, as Vashista moves a few delicate levers which tremble like fingers. With his left arm he holds the girl, who also trembles. Within Vashista’s head a crystal-like organ of extraordinary potency also begins to vibrate. It is indeed as if the cosmic vibrations passed through it, for purification and filtering. He alone alas! is now able to perform this function. As the vibration reaches a high pitch, Vashista touches one of thousands of small knobs and an extraordinary tone fills the hall. Each knob is tuned to the fundamental tone of a star. And the first tone released is that of Vru, which provides the carrier-wave to the realm of the stars, to the immensities of the cosmic mind-force.
Tzema-Tse’s body quivers as the majestic tone booms through her whole being. Something suddenly opens like a tropical flower struck by the rising sun. Vashista feels the opening, and a great excitement seizes him, for he knows now that, in the being whom he holds very close, a door has opened into the mind-space, the space of the stars. What could it mean, if not that in that space there must already dwell, asleep perhaps, an immortal form of being, an eternal “I”? No one, of the Asuan people, has ever experienced such a sudden opening of the inner door so young. Even he, Vashista, had to reach advanced maturity before, through the perfect equalization of all psychic energies and all vibrations in his organism, a moment came when the clear crystal of his conscious-mind dissolved itself to reveal the mysterious Form of Immortality — his starry Self. She must be, indeed, the expected jewel!
Vashista touches other knobs. Magnificent tones superimpose themselves over Vru’s basic vibration, in a constantly shifting, modulating chorus. His finger touches the knob that releases the very high vibration of Svaha, the companion star. Then, Tzema-Tse’s body jerks uncontrollably as if seized by a convulsion. Vashista holds her tightly; looks at her eyes which stare at him, immensely magnified. A picture. Yes, he sees a Form which the eyes mirror, a wonderful Form of pure light. Tzema-Tse suddenly closes her eyes, sobbing. An unknown sound passes through her lips. The old Servant of Vru seems to hear . “Zahar . . . Zahar . . . ” Is it a name?
The instrument has been stilled. Tzema-Tse is still shaking softly. Vashista leads her out of the Cosmophonic field, now quiescent.(3)

This is, of course, a dream which has its place in a story of transcendence and love within the field of the planetary destiny of the human race. Yet an instrument such as the Cosmophonon is not impossible if conditions on earth allow for the development of human beings able to serve as channels for the focused release of the cosmic and transformative power generated by the interplay of polarized transphysical energies, for the focusing agent will probably always be a human being whose consciousness and power has become focused at a transpersonal level of the mind. The sound of music is a revelation of the realm of psychism; and the level of intensity and expression of music is the dynamic reflection of the level of the psychism of especially sensitive and open human beings.

Dane Rudhyar (née Daniel Chennevière) was born in Paris in 1895, studied composition at the Paris Conservatoire, and moved to the U.S. in 1916. In the 1920s, he became associated with “ultra-modernist” composers such as Henry Cowell, Ruth Crawford, Carl Ruggles, and Charles Seeger. He also steeped himself in theosophy, astrology, and Jungian psychology, and began to write voluminously, publishing books on astrology, spirituality, music, and works of fiction. These entwined interests are reflected in the passage above from one of Rudhyar’s last books – The Magic of Tone and the Art of Music, published only three years before his death in 1985 – in which Rudhyar excerpts one of his own earlier works, the tale of space and psychic exploration, Return from No-Return (1973). Through the Cosmophonon, Rudhyar gave shape to the future he envisioned for music and society: freed from the intellectual and formalistic constraints of Western tonality, music would instead embrace “the fullness of vibratory Space, the pleroma of all experienceable sounds,” which would allow all beings to resonate in harmony – that is, in both difference and wholeness, rather than in conformism to a unity. Underwriting this vision was Rudhyar’s conviction that sound is a power emanating from the spirit, and his understanding of avant-garde music as pursuing a “revolution in consciousness” aimed at reviving human feelings for the magical and sacred.